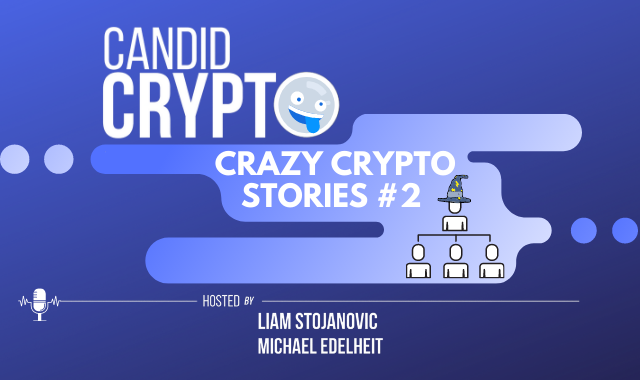 Crazy crypto stories are back! Liam and Michael face off in an epic story battle.

Welcome to Candid Crypto, a place where anyone can learn about Blockchain Tech.

We are two friends who love cryptocurrency and have acted as retail investors and researchers for years. I’m Michael.

And I’m Liam. Our goal is to create a community where listeners can build their knowledge and meet like-minded people in the digital asset space.

Welcome back to another episode of Candid Crypto. Episode 11. Crazy Crypto Stories, Part-2

With a dark twist.

With a pretty dark twist. Michael and I are going to be talking about the not so glamorous aspects of cryptocurrency, the heists, the scams.

The dark side of crypto definitely leads to some mind blowing stories. So for this episode, we wanted to do something a little bit different. So I challenged Liam to come up with the craziest crypto story he could find. And at the end, we would love to hear your thoughts and we want to know who you think the winner is of this week’s challenge.

Let’s begin the battle. So Mount Gox… Mount Gox, also known as Magic, The Gathering Online Exchange, was a bitcoin exchange based in Tokyo, Japan. It launched in 2010. And by 2013, and into 2014, they were handling 70% of all Bitcoin transactions worldwide. They were the largest Bitcoin exchange. And in 2014, they suspended trading, closed their website, and filed for bankruptcy.

Supposedly, all of their Bitcoin had gone missing, which equated to about $450 million went.

I made some purchases off Mount Gox in 2013. And things worked as advertised. I wired my money, I got my Bitcoin. But that wasn’t happening for a lot of people. Most people could not withdraw their funds. They were stuck on identity verifications, or they just were simply unable to withdraw. The Hot Wallet, which contained all the funds for the exchange was sent to an unknown address.

So where did the breakdown really happen?

The exchange was run perpetually as a hackathon. They would build features that users wanted, but they didn’t even test their code. They didn’t have version control. The developers would literally write code and that would immediately land on the live server.

Liam, that is absolutely insane, just due to the fact that Candid Crypto has dev environments and test environments for our website.

Yeah, in these people we’re running a live financial service that was frankly very haphazardly pieced together. In 2014, specifically February of 2014. The nuclear meltdown happened. On the 7th of February 2014, Mount Gox halted all its Bitcoin withdrawals. They claimed they needed to obtain a clearer technical view of the currency processes. Wink Wink!

I think we know what that means, Michael? Sounds like the money ran out. And indeed it did. Because all of their money was from their Hot Wallet, the wallet that controlled the exchange funds had vanished into the Ether. It had been sent to someone else’s address, and they didn’t know whose that was.

So, as the United States Government typically does, we said This cannot continue to happen. We made various arrests related to the people who hacked that exchange. Ultimately, where that landed us is Mount Gox being stuck in a bankruptcy procedure that goes on to this day. As a former Mount Gox customer, I received emails from Mount Gox about their bankruptcy proceedings. The last email I got from them about the bankruptcy was on January, 15 of this year. Now I don’t have any funds on Mount Gox. So I don’t know why I’m [unintelligible 04:20] on these, but there are a lot of people who are probably still waiting for their funds and waiting to get their money back. It sucks. And at the end of the day, it drives home our main point do your own research. Do not keep money on exchanges. Not your keys, not your coins. All right, Michael, tell us about OneCoin.

Hold on to your seats because you’re going to learn about OneCoin. So OneCoin was created by Dr. Ignatova this 36-year-old businesswoman, and she truly was a businesswoman. She was super elegant. She wore expensive clothes, and she basically made a lot of false promises, which is the core of OneCoin. And this was kind of at the time when Bitcoin was becoming more mainstream. So she really drove home that OneCoin was going to be the biggest cryptocurrency in the world and that everybody was going to use it. And if you weren’t part of OneCoin you weren’t part of the crypto revolution. So that’s really how she got so many people in it. And it’s so crazy because between August 2014, and March 2017, more than 4 billion euros were invested from dozens of countries into OneCoin. China actually had over, it looks like $425 million came from China into OneCoin, which just baffles me.

So that brings up a good question, Michael, what was the selling point? Why do people buy OneCoin in the first place?

So the really unique thing about OneCoin is Dr. Ignatova, she basically turned this thing into a multi-level marketing company, which can be legal. Also, there are a lot of cases of temping super shady and illegal. So basically, she sold educational material from 18 to $118,000. Like, what material is worth $118,000?

And I mean, it was just super crazy. And then they would you know, the more material you sold, the more people you got under you, the more successful you are going to be with OneCoin. And the more OneCoin you’re actually getting from everybody under you. And if you don’t know anything about multi-level marketing, it basically looks like a pyramid.

In the end, people started questioning, like, What the hell is this thing? And they even hired this programmer with Blockchain experience for like $250,000 a year. And when he walked in started, he asked, “Where’s your Blockchain? What is this?” And they said, “That’s your job”. So it really is crazy. And Dr. Ignatova is on the run. She has been traveling and is a fugitive for this huge fraudulent scheme that she set up. And she also roped in her brother. It’s a pretty disgusting thing. But it just shows that you got to do your own research. And you got to know that whatever you’re investing in, or whatever project you’re getting into, make sure that it has a solid development team. They’re doing things for the right reasons. And it’s not just a get rich quick, because if it’s too good to be true, it probably is.

Imagine that rags to riches to fugitive.

Yeah, and Liam, I think you said that at this point. Like, she missed her trial. And if she came back, she would be sentenced to like 100 years in prison.

It’s not looking super great if the Secret Service figures out where she is.

Yeah, some of the FBI people investigating OneCoin. They basically are like; I don’t know how they didn’t get caught sooner. This thing looks like a scam. It feels like a scam from the start. It’s amazing that $4 billion from 20 Different countries invested into OneCoin, or invested into this idea of OneCoin.

Well, awesome. Thank you very much for tuning in to this week’s episode of Candid Crypto. So we are juggling all these ideas as Candidate Crypto. We want to build more technical tutorials. We want to build more awesome content for our viewers. And we want you all to be engaged with our community. It’s tough for Michael and I because this is both our part time job. And we frankly have no funding for this. We’re doing it for funsies.

With that being said, if you are enjoying our content so far, please reach out to us. Please shoot us a tweet, please send us an email. We read everything. We really appreciate all the feedback we get from our viewers, and we’re trying to narrow our focus in terms of what content y’all want to see, as well as the content that we think will add value and create value for our [crosstalk]

You all really do motivate us. We love that everyone engages with us and please let us know what story you liked more and who won the crazy crypto battle today? 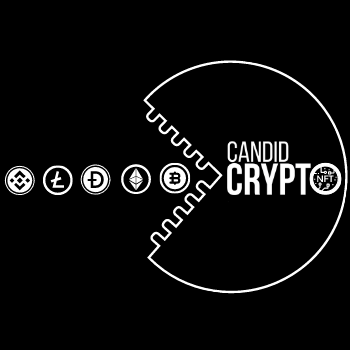 Liam’s tutorial on deploying an ERC721 token onto the Ethereum test network. Link to presentation 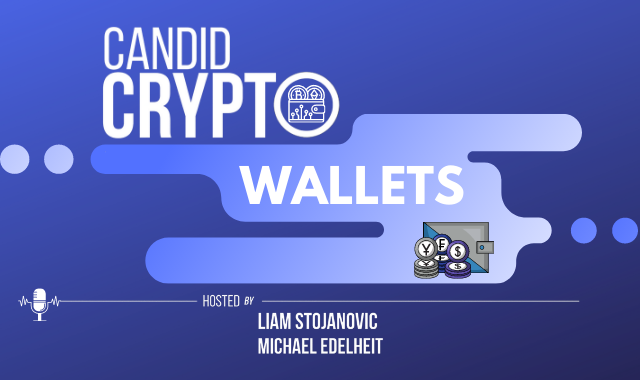 Cryptocurrency wallets. “Not your keys, not your coins”. Episode Transcription – Wallets Liam  00:01 Welcome to Candid Crypto, a place where anyone can learn about Blockchain Tech. Michael  00:08 We are two friends who love cryptocurrency and have acted as retail investors and researchers for years. I’m Michael. Liam  00:16 And I’m Liam. Our goal… 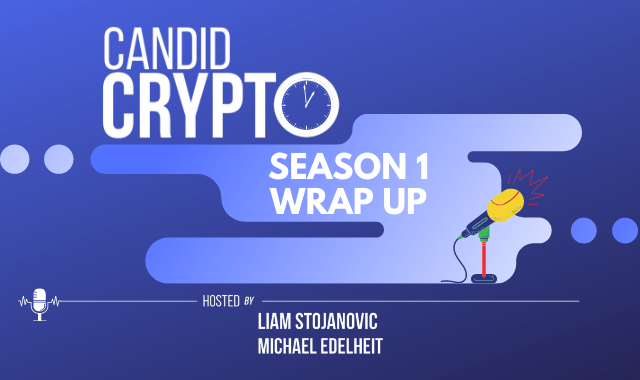 As season 1 of Candid Crypto comes to a close, Michael and Liam reflect on their journey of starting a podcast. Tune in to the last episode of season, and find out what to expect in season 2. Episode 20 Transcription – Season 1 Wrap up Liam  00:04 Are you listening to pirate radio? I’m… 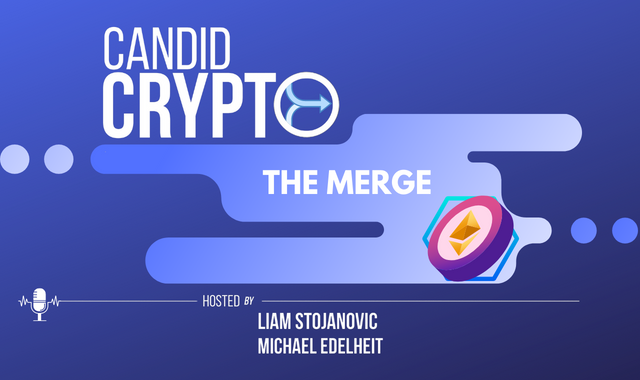 Michael and Liam review one of the most significant events in crypto for the second episode of season 2. “The Merge” is a game changer for the Ethereum blockchain and the sustainability of crypto. Tune in to learn why “The Merge” was essential for the world’s second-largest blockchain, and how Ethereum will never be the… 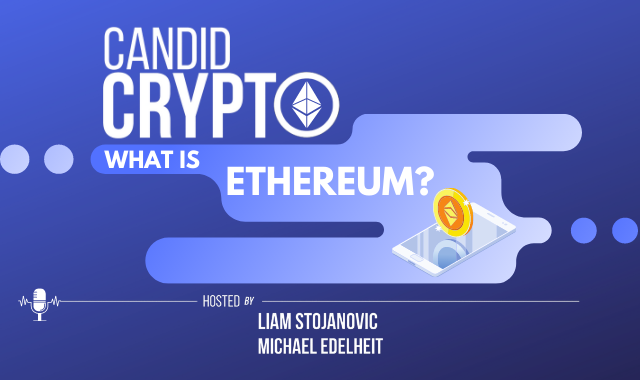 The computational blockchain. Why is a programmable blockchain important? What’s a DAO? Why buy an NFT? Episode Transcription – What is Ethereum? Liam  00:02 Welcome to another episode of Candid Crypto. You’re tuned in with Liam and Michael. Today’s episode is a little different. We’ve been listening to people’s feedback and we’re still trying to… 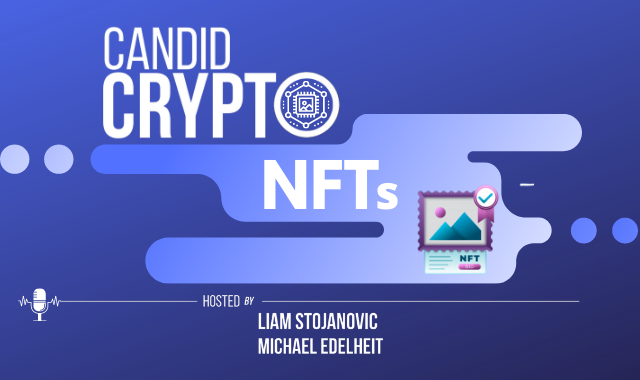